Binance recently announced a $1 billion support fund. In addition, we have seen projects in the BSC ecosystem do some serious pricing. This number is hundreds of times the market value of many projects in the ecosystem, so there is serious growth potential. GameFi has gained serious traction, especially since the second half of this year. Now let’s take a look at some of the more than 100 GameFi projects available on the Binance Smart Chain .

First of all, this model uses a great community-oriented approach. GameFi games run on blockchain. These projects, which allow you to earn BNB, other cryptocurrency or NFT by playing games, have now reached hundreds of thousands of active users. This world, which combines games and decentralized finance, is a combination of the definitions of Game and DeFi .

GameFi is the trend of today and tomorrow, but there is a problem. In the early days of these blockchain-based games, the cryptocurrency community hoped that large gaming markets like Steam would support the industry. Because the meta-universe was revolutionary for the new digital world. However, the opposite happened. Steam and the major game stores that followed decided to exclude projects with this concept from their platforms. Despite this, the major game companies continue their blockchain-centric work without slowing down. GTA continues to use cryptocurrencies in gaming and Fifa continues to use NFT.

There are more than 110 GameFi projects in the Binance Smart Chain (BSC) ecosystem. Above all, the team  is extremely important in these initiatives. It requires more upfront research than smart contract projects, and there’s a chance of losing your investment. You can reduce the risk by doing detailed research.

Each puppy is set up to be different from the other. The combination was quite broad, with 12,000 puppies out of 15 million possible combinations. BNBPuppies are based on the ERC-721 standard , so they can be exchanged for Binance NFT and many other ERC-721 – compatible platforms. You can start playing by setting up a MetaMask connection on the project website.

The game, which has about 160,000 users, has about 120,000 NFTs for vehicles. They have mobile apps for Android and iOS devices, and you can easily play on your phone.

It can be played on Android, Microsoft Windows, and macOS devices with no problem. You can play directly by downloading the game without connecting a virtual wallet. All features in the game are set for free. Items for the game can be sold as NFT and if you want to play a zero-cost blockchain-based game, you can earn rewards while having fun. 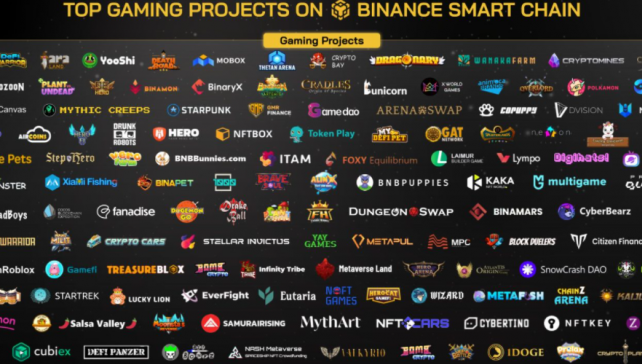 While the above image shows a broad list, it’s not right for everyone. You can find early investment opportunities by exploring these projects that are candidates for one of the most popular games of the future.