Those who buy or sell anything on exchanges like Binance know that there is such a role on the exchange as a market maker. Various fantastic features are attributed to him/her on stock exchange forums. For example, they write that the market maker intentionally made the price go below the stops and took out stop-losses, ripping off regular users. I personally suspected that the market maker was a robot, not a living person.

DeFi technology has made it possible for almost anyone to become a market maker. Liquid Swap is an opportunity to become a liquidity provider in the cryptocurrency market, receiving % from those who make exchanges on the exchange. In addition, there are also rewards for staking.

1. What is the economic point of Binance Liquid Swap

The easiest way to make an exchange is to go to a regular auction and buy ethereum for bitcoins. Or vice versa. Not everyone likes to buy coins at auction. Therefore, on exchanges there is a simple exchanger. It’s convenient – you choose what to exchange for, you choose the amount. And that’s it – the exchange is done. There are no problems with selecting bids from the book, when you buy at the market on normal auctions.

The question is how such simplistic transactions are made. Imagine that someone wants to exchange a million dollars’ worth of coins. If he/she buys at the market, the price may be very far from what it was at the time of the bid. In the order book there may not be the right number of bids to sell at the price the buyer wanted.

This is where the liquidity pool comes to the rescue. In such a pool, both coins are collected. They are there in the proportion in which the coins relate to each other in value. For example, if we take all of the BTC that we have in the BTC/ETH pool, then we get ETH for all of the BTCs, at the current rate.

It turns out that exchanging coins on the exchanger is more profitable and easier than buying on the exchange. Interest for the exchange goes to those who contributed their liquidity to the pool.

Now the staking. The pool holds two different coins. If the pool doesn’t use them, it can lend them. Of course, this is a paid service – there is a fee for using the coins.

So you get two sources of income for the liquidity pool:

The pool divides all the profits it receives by those who have contributed their liquidity to it. It divides equally. The bigger the contribution, the more income the pool will give you.

2. How to get into a position.

Choose a pair of crypto-assets in the list. The pair can be cryptocurrencies and fiat money and stablecoins. There are a lot of pairs.

In some pairs, the annual return reaches significant values. But keep in mind that this is the estimated yield of the last time. No one will guarantee that the pair will bring such returns in the future.

In order to contribute your finances to the selected liquidity pool, you need to have both currencies in the right proportions on your accounts. Alternatively, you can deposit one of the currencies that are available in the pool. Then the system itself will convert part of the currency into the second currency of the pair.

Pay attention to how much you need to deposit to enter a position. Each pair has its own minimum and maximum deposit requirements.

3. How to track the results of investing in the pool

Here we will see a list of all the liquidity pools where we have invested coins. For each of them, there will be information on returns.

Portion Value is the value of your position in U.S. dollars. This figure does not depend on the currency in which you invested. It is counted at the current exchange rate of the coins that are in the pool.

PnL Portion Value (impermanent losses) – shows how much your portion value has risen or fallen in U.S. dollars since you entered the position.

Let’s break this concept down, since not everyone understands what we are talking about.

Tomorrow, coin X drops in value to 1 USD. The system redistributes the pool and it now has 50 X and Y coins each. The cost of the pool should remain 100 USD, logically? But, it didn’t. When the rate of coin X fell, the robot performed a gradual rebalancing. Let’s imagine that the coin’s exchange rate dropped by half in a matter of moments. The robot will not have time to rebalance the pool. The portion in the pool will be 25 X coins and 50 Y coins. And since rates have changed, the portion is now worth 75 USD. Now the Impermanent loss is 25 USD.

Such losses are called impermanent because the rate of coins in the pool can return to their previous values, or even increase significantly. If you close the position now, the losses will become real. If you wait, the loss may disappear altogether.

Impermanent losses can be positive. Exactly the same reasons for which there is a minus.

Pool Portion Composition – how many coins in your portion are in the pool.

Earnings is how much revenue is received in U.S. dollars for the entire time you are in a position. If you click on the calculator, you can see the details.

Unclaimed Rewards are the coins that the pool pays for using your liquidity. You get your portion of the pool’s total swap and liquidity rewards. This section shows rewards in U.S. dollars at the current coin rate. In reality, it is not dollars that are given away, but coins that the pool pays with. The value in dollars is given at the current exchange rate of the coins that are given as a reward.

4. How to get liquidity rewards. 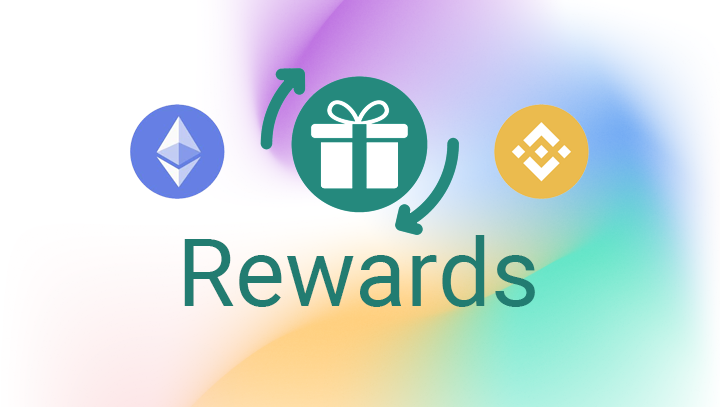 Opposite each of your positions, there are three buttons – Add/Claim Rewards/Remove.

If you click on “Claim Rewards”, the system will show how many coins you get in this pool.

If you now click “Claim Rewards,” the coins will replenish your spot wallet.

By the way – you should pay attention to what coins pay liquidity rewards in which pool. In many pools, they pay rewards in BNB, in addition to the currency pair. The point is that the exchange has the ability to pay commissions in BNB coins. The pool shares rewards in the currencies in which it received rewards from customers.

5. How to add more coins to the pool or how to close a position.

In the same place where you clicked the “Claim Rewards” button, there are two more buttons – “Add” and “Remove”.

In this window, you have to choose how many coins you want to claim. The point is that you can close not the whole position, but only a part of it.

We choose the amount, the coin in which we want to get our finances, and withdraw.

6. Why Liquid Swap, and not a deposit in cryptocurrency, with interest?

It’s all about profitability. Let’s compare the two tools by sorting the instruments by annual income in % at the moment.

Here are the best returns in deposits. 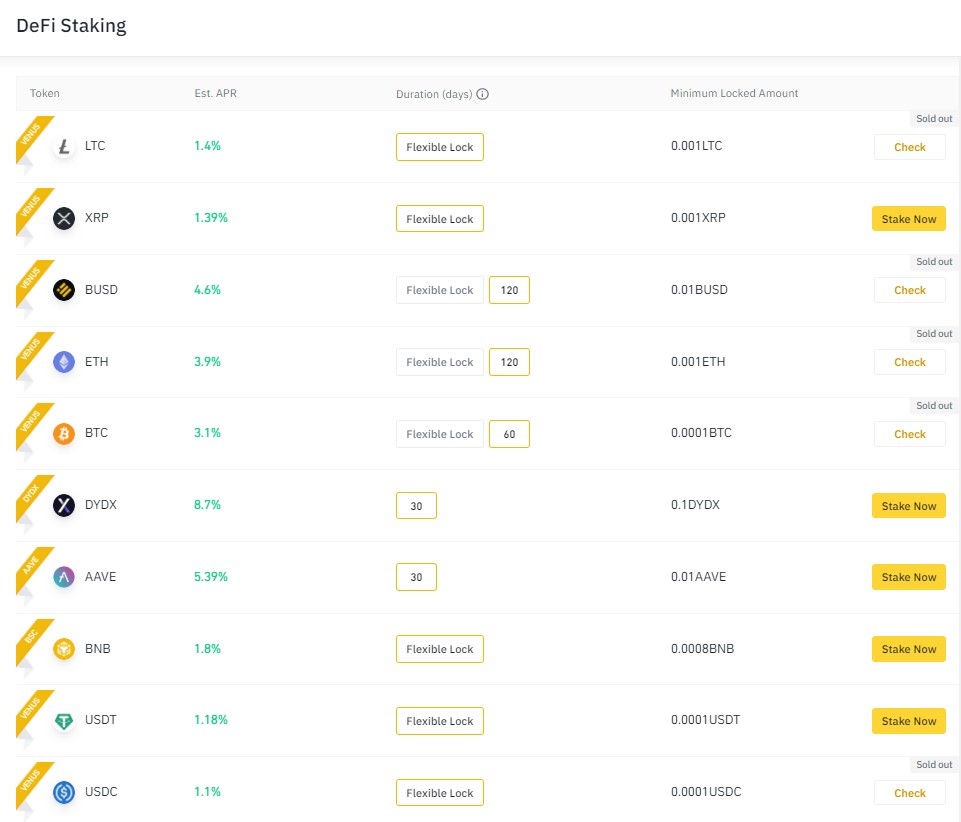 As you can see, the steepest option in staking, gives 8.7% per annum.

And here are the best returns in Liquid Swap. 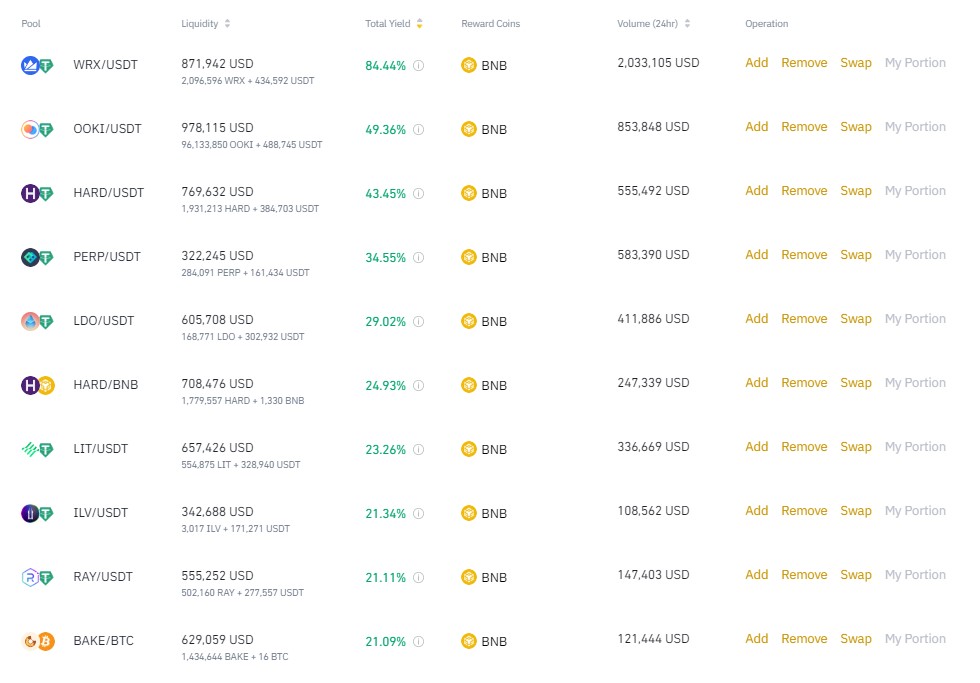